International Women's Day: the struggle of riverside women united in association to strengthen their role in communities

Through ASMAMJ, a partner in the Juruá Middle Territory Program, women train and participate in income generation activities.

Riverside women who live in communities along the Juruá River, in the municipality of Carauari, have, in recent years, sought to strengthen their role. For this, they rely on the Association of Agroextractive Women of the Middle Juruá (ASMAMJ), which develops support and incentive work for projects aimed at and developed by them.

With about 160 members, ASMAMJ represents, in practice, the historic struggle celebrated on March 8, on International Women's Day, for the search for conditions equal to those of men in a region in the state of Amazonas where it is only possible to arrive by boat. , after six days of travel from the capital Manaus, or by plane.

Traditionally, riverside, indigenous and quilombola women play fundamental roles in environmental management and in the conservation of the Amazon's biodiversity. In addition to looking after their homes and participating in community activities, some hold leadership positions and supplement the family's income, working in sustainable value chains or using natural resources.

However, despite this central role, there is a history of devaluation of female work. Many are still marginalized in the decision-making processes of their communities. They are also the most affected among vulnerable groups when it comes to dealing with the impacts of climate change, which exacerbate inequalities, including gender inequalities.

“We want to implement projects that bring more and more visibility, empowerment, income and union. May the riverside women recognize themselves as strong women, who will no longer lower their heads or make their silence a refuge for a sexist society. I intend to encourage them to feel important and engaged so that they understand that they can and can be whatever they want”, says Rosângela Cunha de Lima, resident of the São Raimundo community, and recently elected president of ASMAMJ.

The association is one of the local community organizations that participate in the Juruá Middle Territory Program (PTMJ) as action implementers, along with ASPROC, AMECSARA, AMARU, CODAEMJ and ASPODEX.

coordinated by Sitawi, the PTMJ has USAID/Brazil, the Plataforma Parceiros pela Amazônia (PPA) and Natura as strategic partners. It also counts with the participation of the Bioversity/CIAT Alliance, ICMBio, the State Secretariat for the Environment (SEMA) and OPAN.

“The Middle Juruá region has a beautiful history of struggle and overcoming in search of rights and a better quality of life. However, women did not appear, even playing important roles. For this reason, it is a pride to reach the presidency of ASMAMJ, a young woman who represents a group of women who, from the beginning, adopted the request for recognition as a 'war cry'. The association today unites women and continues that story, but with them as protagonists”, says Rosângela.

With great influence on her upbringing from her mother and grandfather, the new president of ASMAMJ highlights the community and sustainable management of pirarucu as a way to leverage the participation of women in communities.

In addition to the work that they already develop in the evisceration of fish, they are now seeking training to participate in the pirarucu count – an important step in the management to define the amount of fish that each community will be entitled to sell per year – and to develop bio-jewels from the scales. .

“We live in and preserve a forest rich in natural resources that can generate income for women. I intend to encourage them and seek new production chains, in addition to innovating some that already exist. Community management of pirarucu, for example, has been an activity in Médio Juruá since 2011, but the fish scales were wasted in the river. Women saw in them a way to earn money, turning them into bio-jewels. This is an example of an income generation project to be encouraged”, adds Rosângela.

Future – The coordinator of Territorial Programs of the Sitawi, Felipe Pires, highlights that actions to extract essential oils from seeds in the Amazon and the production of biocosmetics will be increased with the support of the Juruá Middle Territory Program.

“The perspective for this new phase of the PTMJ is to further strengthen female entrepreneurship, diversifying production and bringing new income generation opportunities to ASMAMJ. I highlight here the production of essential oils and biocosmetics, using the rich biodiversity available in the region”, says Pires.

For Rosângela, the PTMJ, by encouraging initiatives in the region, helps communities to strengthen themselves and seek positive results, with an impact on forest conservation.

The PTMJ aims to contribute to the sustainable development of Médio Juruá, covering an area of more than 1,020,000 hectares, with two conservation units (Resex Médio Juruá and RDS Uacari) and part of the Deni Indigenous Territory of the Xeruã River. It is structured around three integrated pillars: sustainable livelihoods, biodiversity conservation and social cohesion.

According to her, one way to overcome prejudice and change the masculine pattern adopted by society is to encourage women's participation in decision-making and in the daily lives of communities. “The female presence always changes an environment. But it changes even more when his voice ceases to be a silence. The woman is a being that creates, protects, cares for and gives life to other lives. In the same way, she assumes a role in the conservation of the forest and knows that it is from there that she gets her sustenance and that of her family”, he summarizes. 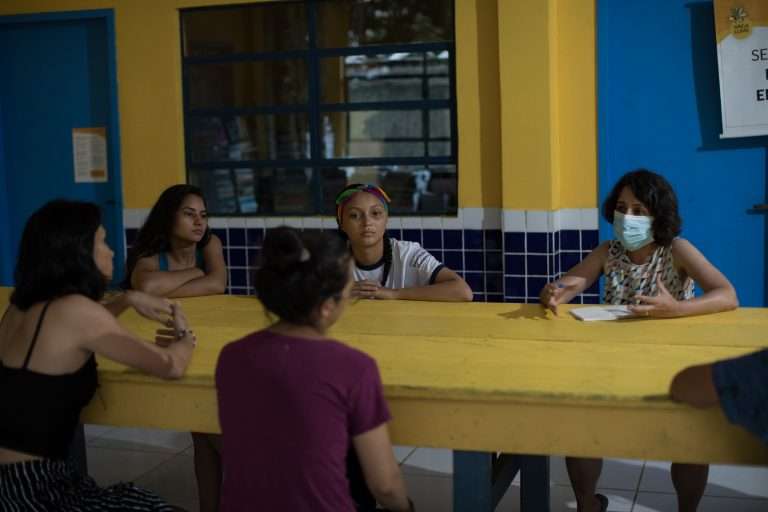